“A DIFFERENT WORLD” Aired 30 Years Ago & Changed My Life

A Different World changed my life. It was and still is my all time favorite sitcom. The Cosby Show was instrumental in my desire to go to college as well, but A Different World gave me a real glimpse of what college life was all about.

I honestly believe I’ve seen every episode and when the re-runs come on, I will stop in my tracks and watch them. These characters were ones that I looked up to and wanted the best for. Although the college was fictional, I would have loved to attend Hillman. The closet thing to this experience was Clark or Spelman. I couldn’t afford either. I still ended up going to a HBCU (Alabama State University) because of A Different World. I wanted to pledge a sorority too, but that didn’t happen.

If I’m 100% honest, I even wanted a relationship like Dwayne and Whitley. I have so many favorite moments of this show, that’s hard to pick just one but here are a few:

It’s hard to believe that the show aired 30 years ago! I often wonder if Denise’s character would have stayed on the show, how would it look different? 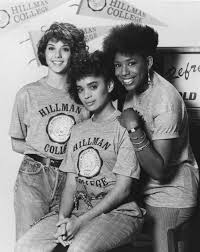 TV One will celebrate the 30th Anniversary of the premiere of “A Different World” with a 14-hour marathon on the same date the series launched, Sunday, September 24 at 10 a.m. ET

The marathon will begin with the pilot episode, which still reigns as the highest rated television pilot in history, garnering 38.9 million viewers.
“After three decades, many of the show’s themes and messages of friendship, coming of age, responsibility and perseverance still ring true. We hope fans will join us as we take a moment to look back with fondness on this American television treasure.” says Dexter Cole, TV One SVP of Program Scheduling & Acquisitions.
The marathon celebrating the fictional HBCU will run from 10 a.m. ET to 1 a.m. ET and will feature a selection of the most popular episodes, in chronological order, containing memorable moments from each season of the series.Interstitials from cast and crew captured recently reflecting on their experiences with the series will also be featured during the marathon. The pilot episode will be presented as a special “Pop Up Edition” filled with show trivia at 10 a.m. ET and again at 8:30 p.m. ET to commemorate the same time the pilot premiered 30 years ago. A Different World premiered on NBC on September 24, 1987 as a spin-off of The Cosby Show. The series originally centered on free-spirited, rebellious Huxtable daughter, Denise (Lisa Bonet), as she attended her parent’s alma mater, Hillman College. During season one, Denise struggles through college and meets memorable friends along the way, including Maggie (Marisa Tomei), Jalessa (Dawnn Lewis), Dwayne (Kadeem Hardison), and Whitley (Jasmine Guy). Seasons two through six capture the essence of being young, black and educated in America by tackling political, ethical, racial, emotional and social issues far before the media was ready to address them.**
TV One viewers can also join the conversation by connecting via social media on Twitter, Instagram and Facebook (@tvonetv) using the hash tag #ADifferentWorld.
Did you watch A Different World? What did you like about the show? What are you favorite memories? [VIDEO]How to Create a Vision Board in 5 Quick Steps! Mom 2.0, Manifestation and My Night in Hollywood #Mom2Summit