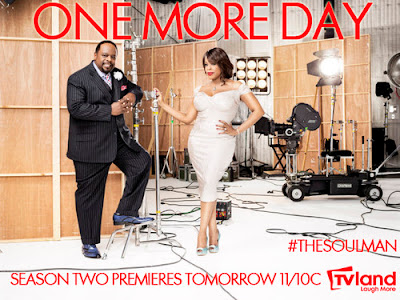 Last night I attended a private screening of the season 2 premiere of TvLand’s The Soul Man hosted by Wesley Jonathan with Lamar & Ronnie Tyler (creators of Black & Married with Kids) at the W Hotel in Atlanta.
The Soul Man stars Ced “The Entertainer“, Niecy Nash & Wesley Jonathan. It will air on TvLand this Wednesday night at 11pm.
From the creators of Hot in Cleveland, The Soul Man revolves around Cedrics character, Reverend Boyce The Voice Ballentine, an R&B superstar-turned-minister who takes over as preacher of his fathers church. Niecy Nash (“Reno 911”) stars as the reverends wife, Lolli. The pilot also features John Beasley (Everwood) as his father, Wesley Jonathan (What I Like About You) as his younger brother. The character of Reverend Boyce originated on a second season episode of Hot in Cleveland in which Cedric guest-starred. Season 2 Premieres June 19 11/10C! Source 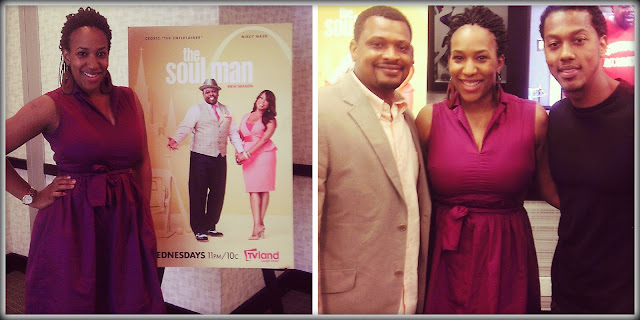 5 Reasons why I like The Soul Man
1. I go to church! We (the hubby & I) go to church every week, most times twice. We even met at church, so being able to see a comedy that revolves around church definitely peaked our interest. I am able to laugh at the inside jokes the writers write because we live that “church” life.
2. It’s not reality TV. It seems like everyone and their pets have a reality show lately. It often seems like there are more reality shows than dramas. For me, the fact that reality shows are not really reality have made me lose interest in most of them. This show is a scripted comedy that actually makes me laugh out loud. And it’s filmed in front of a live audience.
3. It’s Ced’s show! Cedric the Entertainer is my favorite comedian. He makes me laugh just making facial expressions! He doesn’t have to be vulgar or curse to tell a funny joke. I have followed his career for years and so happy he has his own show that showcases his natural talent.
4. Date night TV. My husband watches sports, ESPN & crime shows. I watch CNN, a little reality TV and quite a few dramas. We had 3 shows (2 of which have ended) that we came together once a week to watch. The Soul Man was one of them. We both looked forward to it. We laughed and even talked about the storyline once it was over.
5. A Shirtless man! Wesley Jonathon plays Ced’s brother and he is very easy on the eyes. Last night he talked about how often he took his shirt off last season. And he doesn’t disappoint in the season opener either! He doesn’t want to do it often but the ladies in the room weren’t complaining. Ladies, he is very good eye candy.
After the screening, Wesley Jonathon answered questions about the upcoming season. He was so down to earth and a pleasure to speak with. If you watched last season, you will notice that their daughter is now off to boarding school. They now have to deal with pastoring a church and missing their daughter. Just when they thought they would really be able to take advantage of a kid free home (you know – walking around naked!), here comes his brother. You can’t turn your back on family even when you want to, so this is going to be good.
Wesley also shared some industry secrets and how there are different degrees of “being famous”. He made us all laugh when he said people often confuse him with Nick Cannon. I actually can see the resemblance too! Although he has made a career in comedy, his passion is drama. He hopes to do more dramatic roles soon that show his range in skill.
In the meantime, check out The Soul Man on TvLand! Let me know what you think!

Living Smart: When is the BEST Time to go Shopping?