Motherhood Monday: What’s in a Baby’s Name? How did you decide?

How important is your baby’s name? Very very important! At least to me. Sometimes it’s a no brainer if you have a son because many boys are names after their father. When I was pregnant with my son and I would tell people what the name would be – they would immediately say, “Oh that must be his dad’s name!” I guess I could never choose to name my son Earl on my own! Although, they were right. I wouldn’t have chosen that name for my son, but now I couldn’t see my son as anything other than Earl. Also I looked up the meaning of Earl – noble, warrior. And every Earl I know (besides DMX (rapper) – lol!) is an upstanding great guy! 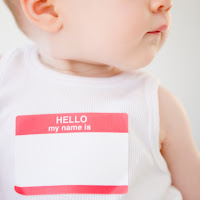 Here are the fastest-rising baby names 2011-2012
I will tell you a secret….. the baby name I have chosen for this baby I am carrying is on this post!! Can you guess?

Girl names sure to sky-rocket:

More girl names on the rise: Isla and other short -ah ending names: Aria, Luna, Cora, Eva, Nora, and Clara (in the tradition of Emma, Olivia, and Ava).
Boy names sure to sky-rocket:
More boy names on the rise:

Source
I will tell you a secret….. the baby name I have chosen for this baby I am carrying is on this post!! Can you guess? Top 5 Things That Change at Home When School Starts {FabTopFive}