I am 24 weeks along and everything is going GREAT! Praise God! Tomorrow I have the appointment that many pregnant women dread. The mighty Gestational Diabetes test. Am I worried, a little. It’s a 50/50 chance. I had it with my first but didn’t have it with my second. With my first, I took a nutrional class then had to monitor my blood and food intake for the remainder of the pregnancy. I have been eating GOOD during this pregnancy but I am also to a point of peace with my weight gain. I can actually still get my size 8’s over my behind, I just can’t close them. So I have been wearing those to work with LONG shirts! 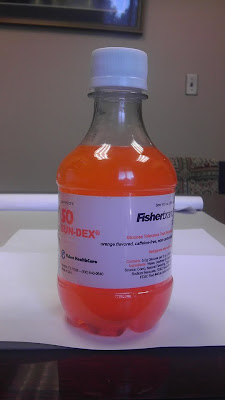 If you know anything about the GD test, you know it’s a LONG ONE! I have to drink this sugary substance and one hour later get tested. If I test positive, I have to test for 3 more hours just to make sure! If I test negative, I can go home!

You know what’s funny? Or rude…depending on how you take it. Someone actually asked me if I had it. I hadn’t seen them in a while and they said, “How are you? Your belly is showing now! Do you have Diabetes this time?” I was caught off guard. I usually get, “How are you feeling?”

What is gestational diabetes?
This is a type of diabetes that some women get during pregnancy. Between 2 and 10 percent of expectant mothers develop this condition, making it one of the most common health problems of pregnancy. Diabetes is complicated, but in a nutshell it means you have abnormally high levels of sugar in your blood. Most women with gestational diabetes don’t remain diabetic after the baby is born. Once you’ve had gestational diabetes, though, you’re at higher risk for getting it again during a future pregnancy and for developing diabetes later in life.

How can I tell whether I’m at high risk for gestational diabetes?
According to the American Diabetes Association, you’re considered at high risk for this condition (and should be screened early) if:
Some practitioners will also screen you early if you have other risk factors, such as:

Have you ever had gestational diabetes? How did it effect the remainder of you pregnancy? Motherhood Monday :: Is My Baby Stressing Me Out? (Stress Rating Scale)