The Disney’s Let It Shine Screening was too much fun!!! 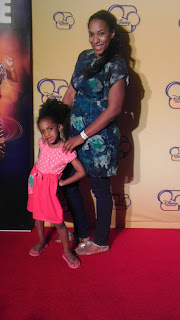 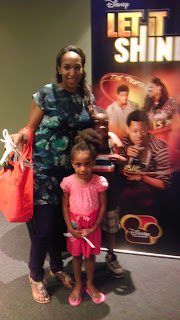 This past Friday we (the hubby and I) were able to take our children to the Disney Premiere of their new made for television movie, Let It Shine. I have been to quite a few movie screenings (with and without the kiddies) but this one was so much fun! Disney really rolled out the red carpet, literally. The screening was held at the World of Coca Cola Studio in Zoo Atlanta. It was also sponsored by Sprint who had a table and gave out a lot of great give-a-ways!

One thing that I enjoyed was how Disney kept the children happy before the movie started. The movie started at 7:30pm and we arrived about 1 hour before. Radio Disney was ready for the children when they arrived. They had snacks (popcorn & drinks) for everyone. They had a team of young adults (Radio Disney) that allowed the children to come on stage to sing, dance, play games, and WIN things! My children won a Let It Shine DVD & movie soundtrack. They even had Let It Shine swag bags filled with a signed poster and t-shirt! I think the highlight of the event for my children was actually seeing the stars of the movie in person! My children are young (6 & 4) so they are not used to seeing a celebrity in person so it was very funny to me when they recognized the stars of the movie and got all excited. The stars of the movie actually sat in the midst of all of us (the viewers) and watched the screening too. Not only were they there but a few other local ATL celebs; Toya (Lil Wayne’s ex-wife & bestselling author) who was so pretty and nice in person; Jasmine Guy, best known for her role on a Different World (and the reason I went to college). I was able to say hello to her too. I told her I was a fan. She was pleasant. Terry Vaughn was there as well. I used to be compared to her all the time when she was on Steve Harvey’s Show (late 90’s). Her most recent role was on Tyler Perry’s House of Payne as a nurse. Loved her character! I didn’t get a chance to speak to her though. I wanted to (we even sat on the same row), but I was nervous. I even saw T.I.’s (the Atlanta based rapper) children!! There were also a lot of local bloggers and actors from the movie there too. 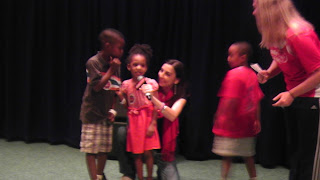 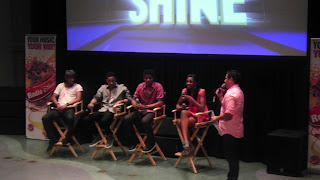 Now for the movie >Let It Shine is a 2012 musical television film set to premiere on Disney Channel June 15th. It features an ensemble cast of Tyler James Williams, Coco Jones, Trevor Jackson, and Brandon Mychal Smith. I really liked it. If you like great dancing and singing, then you will like it too. It’s a movie about a young boy who has great writing skills but is a very shy! He enters a contest and wins but somehow his best friend gets the credit. Instead of stepping up and telling the truth, he lets fear take over and chooses to be in the background. Unfortunately, he starts to regret his decision big time. I love the fact that it was a good quality family movie with no foul language or in appropriate behavior. There is a love connection in the movie and the most they do is hug! #lovethat. I have included a trailer of the movie below, along with my children dancing at the screening!

After the movie, all the children were able to ask the cast questions about the making of the movie. My daughter actually got to speak to Trevor Jackson on the way out. She was all smiles too.

My kids dancing with Radio Disney!