Living Simple: Frank Ski’s Restaurant is …. what you make of it!

I finally dined at Frank Ski’s restaurant last night. My husband and I did a weekend get-a-way and stayed downtown Atlanta for the weekend. (We took the kids to Tennessee for the weekend). We wanted to try out the restaurant and I am glad we did. What’s funny is the waitress said that it seems like Sunday’s are “The New Day!”. Meaning, it seems like people pick Sunday to try Frank Ski’s out for the first time! 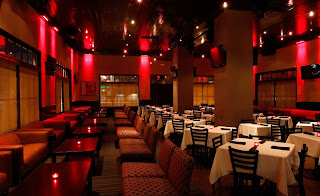 When I first walked in I noticed the feel, laid back. The decor was very modern but also relaxing. Around the sides of the wall were the low club seats with low tables. In the middle were regular tables with small red candles lit. The restaurant had a few different sections that you would really only see if you were given a tour or had a small party in those areas. The restaurant gave me a New York Brownstone feel. I love the dark hard wood ceilings and the red lighting bouncing off the wall. It was romantic without trying to be. Frank Ski’s even has a dress code! Honestly his restaurant reminded of what Justin’s (P.Diddy’s Atlanta’s restaurant) used to be, and that is The Hot Spot. I was telling my husband that Frank Ski is a major figure here in Atlanta and since we hear him everyday, he does alot in the community, & even hands on at his restaurant – I think his restaurant will be a hot spot for years to come! 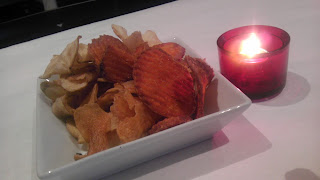 Now, lets get to the food. Most restaurants bring you bread while you wait, well not Frank Ski’s! They bring you freshly fried white & sweet potato chips! And I really like them, especially the sweet potatoes. We ordered Calamari as an appetizer, it was the perfect serving and fried to perfection. I would definitely order that again. I had the Seafood Pot Pie. I did like it. It was filled with Lobster, Shrimp & Crab meat and I must say it was a generous portion of all three meats. The sauce was creamy & Cajun and the potpie breading was just right for me. I just wish I had vegetables. Usually a potpie has veggies, and mine was just full of meat. It did have small white potatoes, but I really didn’t like those. Other than than, I enjoyed my meal. When I come back, I will try something else though. My husband story is a little different. He order the famous SNAPPER. I say famous, because this is supposedly a big seller there. Well, my husband is from Florida and grew up eating all kinds of fish – so he (thinks) knows a good fish! LOL!! Well, he says his fish was fried to long. I tasted it and I must admit, it was very chewy! Usually fish melts in your mouth. I had to chew it for a little bit too long. The waitress immediately cooked him another fish. Earl said this was a better fish, but it was still cooked a little too long. They cut the fish to make it cook quicker but what it also does (per Earl) is let the grease seep in. And honestly, I tasted grease on the second fish, but Earl said it was better….so there ya go. He said he would come back as well and agreed he would try something else. I hear the fish Taco’s are great. It’s funny because the lady next to us ordered the SNAPPER at the recommendation of our server, also after seeing Earl’s plate. I asked her how she liked and she said the same thing – it was fried maybe 3-5 minutes too long 🙁 but she still like it and that’s all that matters!﻿﻿﻿﻿﻿﻿﻿﻿﻿

Now Frank Ski was there but I didn’t say anything to him. He actually came and spoke to the table next to us and even took pictures. My husband told me to say something, but I was nervous! ﻿Now someone came to check on us after my husbands fish was cooked and told us we would get a tour after we eat, but after we paid we waited about 15 minutes – the lady never came back. So we left. 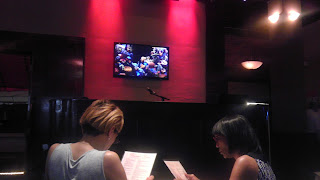 All in all, we enjoyed the restaurant! Our server was just superb. I don’t remember her name, but she was a joy! The restaurant itself was nice and the food was good. I look forward to going back with my friends on a girls night out when Frank Ski DJ’s! You heard me right, I was told, he DJ’s on Saturday night and they turn the restaurant floor into a dance floor!! You know we have to get our Wobble Wobble on!

Shot@Life Event at the GA Aquarium! I am grateful.