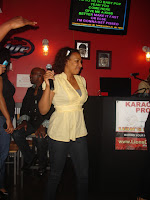 Last night I was invited to a Fundraiser for the Atlanta Diaper Relief at Nancy’s Chicago Style Pizza. I had so much fun! It was all about giving back and having fun. Everyone brought diapers and did Karaoke! I have never did Karaoke and always wanted to, so last night I conquered my fear! I performed Salt-n-Pepa, Push It with a new friend V.Renee Jones! The event was also sponsored by Ciroc, they even had a signature drink called, The Baby Maker. In addition to walking around with mini Ciroc cupcakes!

Atlanta Diaper relief also partnered with BeEverywhere, a social media company in Atlanta doing big things! What is Atlanta Diaper Relief? It’s a Diaper Bank! One in three American moms struggle to provide their babies with a basic essential-diapers. This is called diaper need, and there’s very little help or public resources that address this issue. For instance, food assistance programs like food stamps and WIC focus solely on food and nutrition and don’t cover diapers.That’s why diaper banks like Atlanta Diaper Relief are so critical. Similar to food banks, we will collect diapers and distribute them to daycare centers and local social service agencies – such as women’s shelters and food pantries – that, in turn, give them to families in need. Usually, the diapers are collected through diaper drives and fundraising events.
Atlanta is the poorest city in the U.S. for children – more children in Atlanta live in poverty than in any other city. And some 48% of all the children in Atlanta in poverty live in families with annual incomes of less than $15,000 a year. Did you know that the fastest growing group of homeless people are children under 9 years of age. Homeless families are typically a mother in her late twenties with two children. And almost half of the homeless children are under age six, according to the Metro Atlanta Task Force for the Homeless.

I was able to meet Kia Morgan Smith,  Atlanta Diaper Relief’s Founder and Executive Director. Kia is a former education Reporter and worked as a foot soldier on the front lines of critical education issues for 15 years before deciding to become an educator in 2001. She understands what each child needs and what it takes to help them reach their full potential. Kia dealt with education on such an intricate level as a reporter that she became a teacher in hopes that she could somehow make a difference in the lives of children.
Source.
If you know anyone who is in need of diapers, click here!
If you want to attend upcoming diaper drives, click here!
Here are 2 QUICK VIDEOS of me doing a small part of my Karaoke Premier!