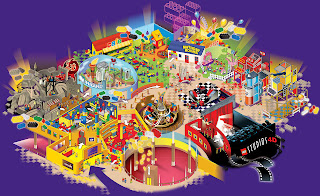 My son started asking me last month about going to LEGOLAND®! I was shocked because I really didn’t know a LEGOLAND® existed. I thought he just wanted to go to the store and play with Legos! Well, one day I was riding in the car and heard, “Attention Attention Lego Land is coming to Atlanta!” I guess my son knew something I didn’t. After doing more research, Lego Land seems really cool and now I can’t wait for it to open so I can go and act like a kid again.

Lego Land is due to open in Phipps Plaza on March 17th from 10am-4pm. Phipps Plaza is an upscale mall across the street from the famous Lenox Mall. I was very surprised that they would put a semi-amusement part in this upscale mall, but I hear they have many successful children stores within the Plaza already. Lego Land also is set to bring about 400,000 visitors a year! That’s big business for the other stores too!
LEGOLAND® Discovery Center Atlanta – it’s like you’ve just jumped into the biggest box of LEGO® bricks ever! Featuring a great range of kids’ attractions, you can join the battle on Kingdom Quest – an interactive LEGO laser ride, feel a part of the story in the 4D cinema,
learn top LEGO building secrets from the Master Model Builder, see iconic landmarks in MINILAND, make a celebration even more memorable in one of our special birthday party rooms. New for 2011 is the Merlin’s Apprentice ride where guests can enter Merlin’s magical potion room and discover a LEGO wizard’s world of spells and sorcery.
Round and round you go, pedal as fast as you can to help Merlin conjure his magic – can you reach the skies and become Merlin’s top wizarding apprentice?
LEGOLAND Discovery Center in Atlanta is your passport to a LEGO world of colour, creativity and fun, providing fantastic family entertainment together with a great range of educational activities.
With over 2 million LEGO bricks under one roof, what will you discover?
Over 2 million LEGO bricks under one roof
Kingdom Quest – an interactive LEGO laser ride
4D Cinema – feel part of the story
Master Model Builder – learn LEGO secrets
Miniland – see iconic landmarks
plus party rooms, school workshops and a huge LEGO shop!
Come share our LEGO world of color, creativity and family entertainment. It’s the ultimate place for LEGO fans – young and old!
Ticket Prices are $12.50 plus tax (or book online and save %10) click http://atlanta.legolanddiscoverycenter.com/atlanta/ or call 404-848-9252